Imagine biking across the country in one of the world’s most challenging races for ultracyclists – the Race Across America (RAAM).

Imagine biking the 3000 mile route through 12 states in intense heat, rain and snow … through the deserts, mountain ranges and the Great Plains in just 9 days.

That’s what Team Sea to See is all about. This eight person, four tandem team includes sighted front riders (pilots) and blind rear riders (stokers). It is the first team ever to compete with all blind stokers, and Wrap for a Cause has joined them in their effort to illustrate the immense capabilities of people who are blind and to bring awareness to the shockingly high joblessness rate of 70% among the vision-impaired.

These four athletes are all blind, and will serve as stokers for the team – the rider who sits behind the pilot on a tandem bicycle to provide extra power. 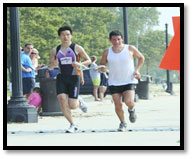 Jack Chen is an attorney for Google, holds forty U.S. patents, and serves on the boards of several organizations, including Lime Connect, an organization rebranding disability in the workplace, and Aira, a technology start-up which has created a visual interpreter for the blind using smart glasses. Jack obtained his undergraduate and graduate degrees from Harvard and Berkeley, respectively, and his law degree from Fordham. He has run nine marathons, climbed Mt. Kilimanjaro, and completed both the Florida and New York Ironman triathlons

Dan Berlin is co-founder and CEO of Rodelle, a world-leading vanilla extract company, and Team See Possibilities, a non-profit supporting children who are blind throughout the world. His athletic accomplishments include twelve marathons and the Boulder Ironman, becoming the first blind athlete to run Rim to Rim to Rim in the Grand Canyon, running the Inca Trail to Machu Picchu in less than 13 hours, and climbing to the top of Mt. Kilimanjaro at night to highlight blindness. 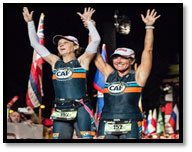 Kristina “Tina” Ament graduated from Yale in 1984 and received her law degree from Stanford in 1987. She works as an Assistant U.S. Attorney for the U.S. Department of Justice in Washington, DC, and lives with her guide dog, Higgins, in Alexandria, Virginia. She is an eight-time Ironman Triathlon finisher. In 2015, Tina took up ultra-cycling, winning 12-hour races at the Midatlantic 12-Hour Championship and Bike Sebring in Florida.

Kyle Coon became one of the first competitive blind rock climbers in the U.S. as a teenager. He earned his degree in interpersonal / organizational communication from the University of Central Florida and has since spent time in the nonprofit, food, and military sectors. Since getting into running in his early 20s, Kyle has completed four marathons (including Boston), two Ironman Triathlons and numerous other endurance races. He is only one of nine athletes who is blind or visually impaired to complete an Ironman Triathlon in under 12 hours.

Now imagine that you could also support their cause while also getting nationwide exposure for your organization, for a fraction of the cost of a billboard or radio spot. 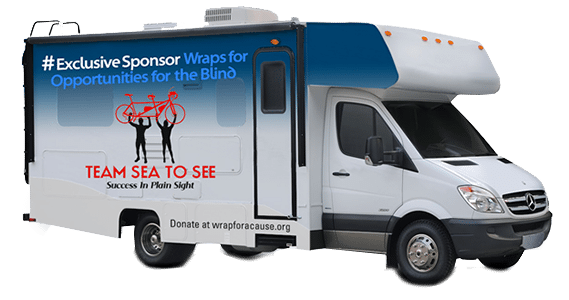 Building off our College/University program, Wrap for a Cause will wrap touring vans for Team Sea to See. Sponsors can choose from three wrap sponsorship levels – Exclusive, Leading and Participating.  Each provides opportunities for co-branding and media visibility, including promotion in the documentary chronicling the cyclists and their nine day trek.

Get in touch today for more information about Team See to Sea and the opportunity for you to Wrap for a Cause.